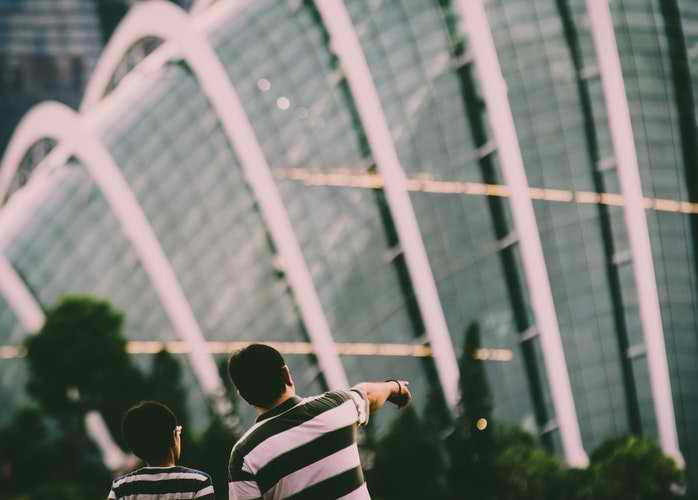 When lunch was over, I would find my dad sitting in the family room, sleeping in front of the television. After a while, I’d tell my mom that I’ll head home and rest as well. I would say goodbye to my dad, and tell him to go to his room to sleep. He would always ask me to stay, then try to stay awake. But in a matter of minutes, he would doze off again. Then the pattern continued.

Every so often, during the week, he would call and tell me to come home because my mom cooked my favorite meal. After the meal was the same story again—him dozing off, me telling him to sleep, him asking me to stay.

Now, once in a while, he would ask me to do things for them, like drive them around and run errands with them. When I’m not there, they have someone else who does that for them.

I could not understand my father many years ago, until I realized later on that my dad just wanted me there. This, in a very simple way, is a picture of who God is as our Father, and how He relates to us as His children.

The famous parable of the Prodigal Son illustrates this truth further. But instead of talking about the younger son, let’s shift our attention to the older brother.

“Now his older son was in the field, and as he came and drew near to the house, he heard music and dancing. And he called one of the servants and asked what these things meant. And he said to him, ‘Your brother has come, and your father has killed the fattened calf, because he has received him back safe and sound.’ But he was angry and refused to go in. His father came out and entreated him, but he answered his father, ‘Look, these many years I have served you, and I never disobeyed your command, yet you never gave me a young goat, that I might celebrate with my friends. But when this son of yours came, who has devoured your property with prostitutes, you killed the fattened calf for him!’ And he said to him, ‘Son, you are always with me, and all that is mine is yours. It was fitting to celebrate and be glad, for this your brother was dead, and is alive; he was lost, and is found.’”

A son, whether he is an exceptional servant or not, remains a son; he remains an heir. In the same way, whether or not we are by any means exceptional in serving God, He loves us and we are still His children.

The sad reality we see many times are sons who make exceptional servants, but forget their positions as children of God. The responsibility of being a son had driven the older son so much that the guilt haunted him whenever he could not serve, give, and be there for his father. There was a celebration in his house, and he didn’t feel like he had the freedom to go in and celebrate. Guilt and responsibility had become the driving force of his relationship with his father, and so he failed to see that his father already accepted him just the way he is.

The relationship we have with God is a freedom we enjoy, not a bondage that we are under. This also echoes in the story of the younger brother, more known as the prodigal son.

“But when he came to himself, he said, ‘How many of my father’s hired servants have more than enough bread, but I perish here with hunger! I will arise and go to my father, and I will say to him, ‘Father, I have sinned against heaven and before you. I am no longer worthy to be called your son. Treat me as one of your hired servants.’”

The younger son’s debaucherous and wild living broke every conviction his family stood for. the son destroyed their family name. But when he realized what he had done, he hoped that his father could at least see some value left in him, even as a hired servant. But instead, here’s what the father did when he returned:

“But while he was still a long way off, his father saw him and felt compassion, and ran and embraced him and kissed him. And the son said to him, ‘Father, I have sinned against heaven and before you. I am no longer worthy to be called your son.’ But the father said to his servants, ‘Bring quickly the best robe, and put it on him, and put a ring on his hand, and shoes on his feet. And bring the fattened calf and kill it, and let us eat and celebrate. For this my son was dead, and is alive again; he was lost, and is found.’ And they began to celebrate.”

In place of anger, there was compassion. In place of harsh words, there were kisses. In place of unforgiveness, was the clothing of fine possessions. And in place of punishment, the father hosted a grand celebration. The father received him back as a son, and not a servant.

But the older son, so driven by responsibility, couldn’t see it this way.

…but he answered his father, ‘Look, these many years I have served you, and I never disobeyed your command, yet you never gave me a young goat, that I might celebrate with my friends. But when this son of yours came, who has devoured your property with prostitutes, you killed the fattened calf for him!’

Another way that we could read the son’s words is this: “Look, all these years I’ve been SLAVING for you and never disobeyed your orders.”

In place of sonship, the older son took on himself the role of a servant. The older son forgot his true place with his father.

Called to a Relationship

Despite the older son’s complaints, this was how the father responded:

And he said to him, ‘Son, you are always with me, and all that is mine is yours. It was fitting to celebrate and be glad, for this your brother was dead, and is alive; he was lost, and is found.’

Their sonship was a position they kept, regardless of how good they were as children, and all that the father has is theirs.

In whatever capacity you serve God today–whether it’s by engaging your classmates or communities, studying hard, reading His word, leading Victory groups, or serving in a ministry, among others–know that your Heavenly Father is calling you back to a relationship with Him. Let us remember that being servants of God and ambassadors of Christ are just descriptions of our different roles and functions.

At the heart of it, our identity is being children of God. All that we are, and all that we have is in Him because He is our dad. Let your relationship with your Heavenly Father define who you are today.

Bishop Juray Mora has been in full-time ministry for the last twenty-eight years. He served as senior pastor in Victory Iloilo for twelve years and in Victory Bacolod for three years. He is a member of the Bishops’ Council. He is married to Deah for 28 years and they are blessed with six children - TJ, Iya, Sophia, Juliana, Celina, and Raymund.